Noah Webster (1758 – 1843), was a lexicographer and a language reformer. He is often called the Father of American Scholarship and Education. In his lifetime he was also a lawyer, schoolmaster, author, newspaper editor and an outspoken politician. 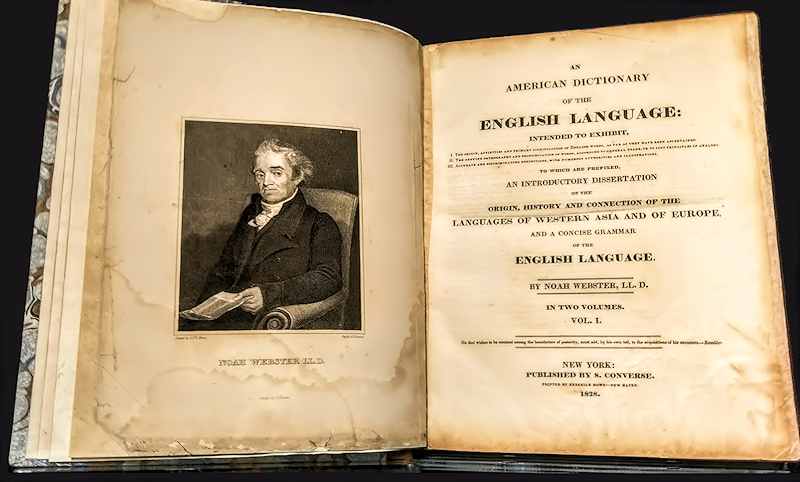 Noah Webster was a very learned and devout man, and his ideas about language in his long introduction to his dictionary make for interesting reading. The frontispiece gives us a wonderful portrait of Webster. He presents as a man of strong will and determination, qualities he would have needed to push his great project to a conclusion.

In total it took twenty-eight years to complete. To evaluate the etymology of words, Webster learned twenty-six languages, including Old English (Anglo-Saxon), Greek, Hebrew and Latin. Webster completed his dictionary during his year abroad in 1825 in Paris, France, and at the University of Cambridge. His book contained seventy thousand words, of which twelve thousand had never appeared in a published dictionary before.

As a spelling reformer, Webster believed that English spelling rules were unnecessarily complex, so his dictionary introduced American English spellings, replacing colour with color, substituting wagon for waggon, and printing center instead of centre. He also added American words, like skunk and squash, that did not appear in British dictionaries. At the age of seventy, Webster published his dictionary in 1828, registering the copyright on April 14. Webster did all this in an effort to standardize the American language. 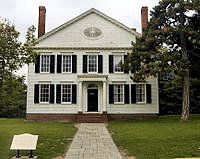 Webster's New Haven home, where he wrote An American Dictionary of the English Language. Now relocated to Greenfield Village in Dearborn, Michigan.

Though it now has an honored place in the history of American English, Webster's first dictionary only sold two and a half thousand copies. He was forced to mortgage his home to develop a second edition, and his life from then on was plagued with debt.

Christian readers will find it rewarding to compare his definitions of such words as "marriage", "education", "sin", "law", "faith", "prayer", etc., with those given in any modern dictionary. They will no doubt be surprised at the great differences, and may come away with a renewed respect for American.

Noah Webster also used quotes from many authors of classical literature in his dictionary. His work went on to inspire many other authors in their use of the language. As with Emily Dickinson, we know that she made frequent and extensive use of Noah Webster's 'Dictionary of the English Language' in writing her poems, paying attention not only to definitions but also to Webster's etymologies and his illustrative quotations.

The scholarly consensus is that she probably made use of an 1844 reprint of the 1841 edition, but since this is now rare, and since the 1828 edition was also in the Dickinson library, the present facsimile of the 1828 edition becomes an important resource for helping us to recover at least some of the senses in which she understood certain words.

This is a book that should be in everyone's library, as providing a fund of wisdom, knowledge, and information that few modern books can even begin to approach.